DNA Evidence of the Black Death

The Black Death is back in the news. 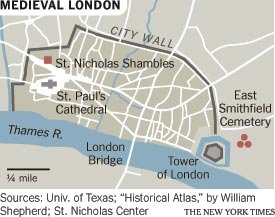 Several teams of scientists have been working over the past decade to extract DNA evidence from bodies of victims of the Black Death in fourteenth-century Europe.

The latest findings confirm several other teams’ work in identifying Yersinia pestis as the microbe responsible for the Black Death pandemic. More research is needed to determine the pattern of transmission of the disease, however, since it spread much more rapidly than modern forms of the bubonic plague.

The New York Times reports on the latest team’s research on bodies from a London cemetery.