Chicago has become a real center for French art history.

Chicago-based art historians have made a mark with their research on French art and culture. Rebecca Zorach, Associate Professor of Art History at the University of Chicago, has become one of the leading art historians of the French Renaissance in the United States, on the strength of her Blood, Milk, Ink, Gold: Abundance and Excess in the French Renaissance (Chicago: University of Chicago Press, 2005). 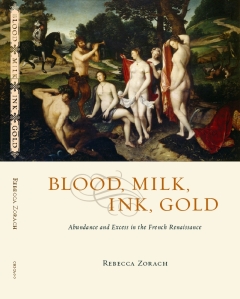 Other faculty in art history, history, anthropology, and related fields at Northern Illinois University, University of Illinois at Urbana-Champaign, and other nearby colleges and universities support the growing focus on French art history in Chicago by presenting their work periodically at the Newberry Library, AIC, and other institutions in Chicago.

A new traveling exhibition on “Impressionism, Fashion, and Modernity“—currently at the Musée d’Orsay in Paris—is coming soon to the Art Institute of Chicago (AIC). The AIC periodically organizes blockbuster shows on French and Francophone artists such as its 1993 “Magritte” and 1995 “Claude Monet: 1840-1926” exhibitions.  Recent AIC exhibitions on French art history include: “Kings, Queens, and Courtiers: Art in Early Renaissance France“; an exhibition on the art of Bonnard, Vuillard, and Roussel; “Entre Nous: The Art of Claude Cahun“; and a 2010 exhibit featuring the photography of Henri Cartier-Bresson.

The AIC publishes catalogs for many of its exhibitions, including the volume edited by Martha Wolff on Kings, Queens, and Courtiers: Art in Renaissance France (New Haven, CT: Yale University Press, 2011).

Other Chicago museums, such as the Museum of Contemporary Art (MCA) and the Newberry Library, have produced temporary exhibits on French art history. The MCA frequently features artists and art collections with French connections, such as a recent exhibit, “Ronan and Erwan Bouroullec: Bivouac.” The Newberry Library has showcased its stellar collections of French books, prints, and maps in numerous exhibits. The Field Museum is bringing the new Lascaux exhibition of replicas of cave paintings to Chicago this year.

The Director of the Art Institute of Chicago, Douglas Druick, was named Officier in the French Ordre des Arts et des Lettres by the French Ministry of Culture in 2012.  The French Embassy in Washington reports on the award.

Sylvain Bellenger, an experienced French museum curator and director, was recently appointed as Searle Chair and Curator of the Department of Medieval through Modern European Painting and Sculpture at the Art Institute of Chicago. Art Daily reports on the hire.

The Art Institute of Chicago has produced a new French-language audio guide to its collections for French and Francophone visitors. A recent teacher workshop at the Art Institute discussed the new guide.