Posted on February 11, 2013 by briansandberg

Pope Benedict XVI has surprised Italians and the world with an announcement that he plans to resign the Papal throne and go into retirement at the end of the month. Benedict XVI is 85 years old and says that he is too tired to continue the duties of leading the Catholic Church. 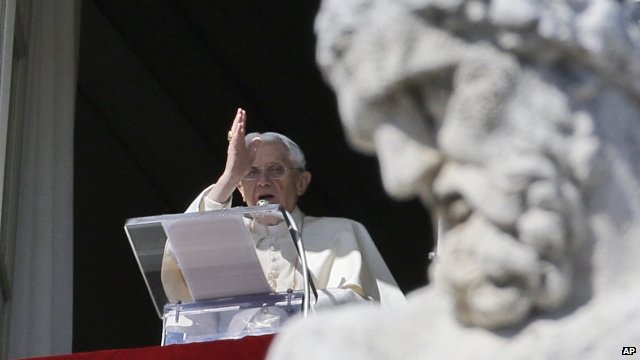 Benedict XVI is not the first pope to retire. Pope Gregory XII resigned in 1415 during a period of conflict in the Church known as the Great Schism (1378-1417). A provision in canon law provides for the possibility of a legitimate papal resignation.

La Repubblica and the BBC report on the surprise announcement. NPR provides an audio report, including an interview with NPR’s Silvia Poggioli.

An English translation of the text of Pope Benedict XVI’s announcement is available on NPR’s website.

Silvia Poggioli provides an excellent report on Pope Benedict XVI’s legacy on NPR. The French newspaper Le Monde offers a retrospective on Benedict XVI, focusing on the many scandals he faced as pope. The Washington Post delves into the VatiLeaks scandal and corruption in Papal administration. Le Monde and Corriere della Sera report on criticism of the resignation by Catholic clergy and lay people.

Charles Keenan, a doctoral student in History at Northwestern University, offers historical context on previous papal resignations in an article on HNN.

For context on Gregory XII’s resignation and the history of the Great Schism, see:

For a history of papal elections, see:

NIU students in HIST 420 The Renaissance and graduate students in Mediterranean World history will be interested in tracking this story and the upcoming conclave to elect a new pope.