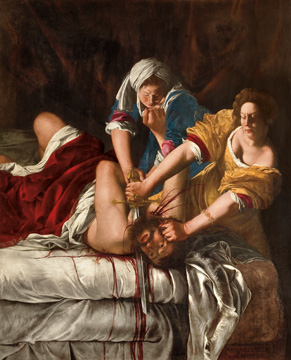 This famous painting is one of the quintessential images of gender and violence in the early modern period, as well as one of the masterpieces of one of the most famous women artists ever.

The Art Institute of Chicago is hosting an exhibition built around the Gentileschi painting, focusing on the theme of Judith in art.

The Art Institute of Chicago’s website states: “An exceptional loan from the Uffizi Gallery in Florence, Artemisia Gentileschi’s sensational Judith Slaying Holofernes (c. 1620) comes to Chicago for the first time. In this monumental picture, Artemisia Gentileschi—the most famous 17th-century Italian woman artist—captured the decisive moment of the biblical narrative of Judith. To save the Jewish people, Judith savagely decapitated the Assyrian general Holofernes. Rather than focus on the ideals of beauty and courage inspired by the Jewish heroine, as did many other artists, Artemisia chose to depict the story’s gruesome climax, producing a picture that is nothing short of terrifying. As Judith severs Holofernes’s head with a sword, her brow is furrowed in concentration, her forearms are tensed, and blood spurts wildly from her victim’s neck. Artemisia was known as a follower of Caravaggio, and the startling naturalism of the scene is enhanced by her technique of painting directly from life and employing sharp contrasts of light and dark colors. This work represents not just the apogee of Artemisia’s oeuvre but stands as a masterpiece of Baroque art.”

Northern Illinois University students of Renaissance and Early Modern European history will want to see this exhibition. Graduate students working on issues of religion and violence will want to study the artworks and exhibition catalog.