Things have been rather crazy in Paris over the past week with the terrorist attack on Charlie Hebdo, the shootings of police officers, the massive manhunt for the gunmen, and two police assaults on a print shop and a Hyper Cacher grocery store that were seized by terrorists.

I went to the rally on Wednesday evening at place de la République in solidarity with the victims of the Charlie Hebdo attack. There was a crowd of an estimated 35,000 people at the rally, which was mostly somber apart from some chants of “Je suis Charlie” and “Liberté d’expression.”

Despite the attacks, businesses, government offices, public transportation networks, restaurants, and tourism services continue to operate, except in the specific areas that have been directly affected by shootings. The winter sales started on the day of the attack on Charlie Hebdo and people have continued to shop for clothes at the boutiques in the Marais and the grand magasins along boulevard Hausseman throughout the tragic events of the past week.

The general mood among Parisians I know seems to be one of sadness and relative shock, but not surprise. Millions of French people felt touched by the terrorist attacks and decided to participate in a series of massive marches in cities across France on Sunday.

I participated in the massive Marche Républicaine in Paris on Sunday, which was absolutely amazing.  There were an estimated 1.5 million people at the march in Paris, with crowds so enormous that we all simply took over large swaths of Paris from Gard du Nord through the 4th, 10th, 11th, 4th, and 12th arrondissements to place de la Nation. Many of the news reports referred to the march participants as a “marée humaine.” 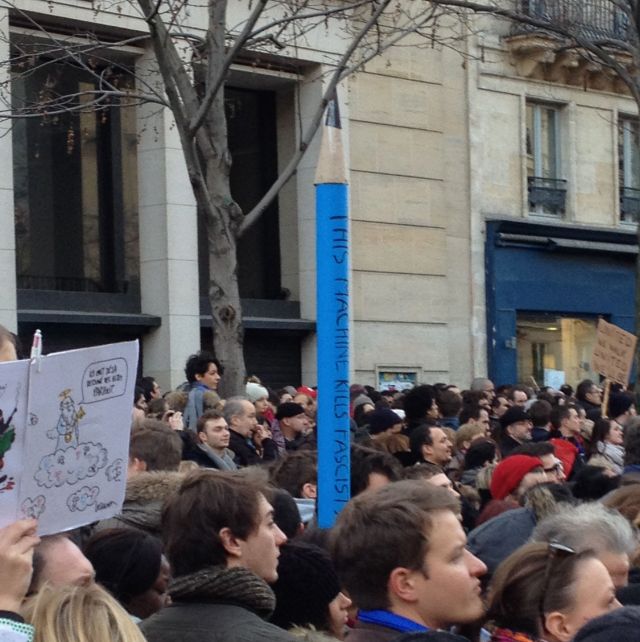 A multi-ethnic France was present at the march, with white, Arab, African, and Asian French people participating, as well as lots of international students and visitors. The crowds were also religiously diverse, including Christians, Muslims, Jews, Buddhists, Sikhs, and atheists.

If you would like to see more about the terrorist attacks and the situation in Paris, see my other recent blog posts at https://briansandberg.wordpress.com/ and at http://religiousviolence.wordpress.com/.