Historical filmmaker Ken Burns delivered the Jefferson Lecture at the National Endowment for the Humanities on 9 May 2016.

Inside Higher Ed reports that “Ken Burns, the documentary maker who brought the Civil War, the histories of baseball and jazz, and the biographies of the Roosevelts to film, had a chance Monday night to honor the National Endowment for the Humanities, which supported much of his work. He praised the NEH for both its grants and its standards, and thanked the endowment for naming him to deliver this year’s Jefferson Lecture, the nation’s highest annual honor in the humanities.” 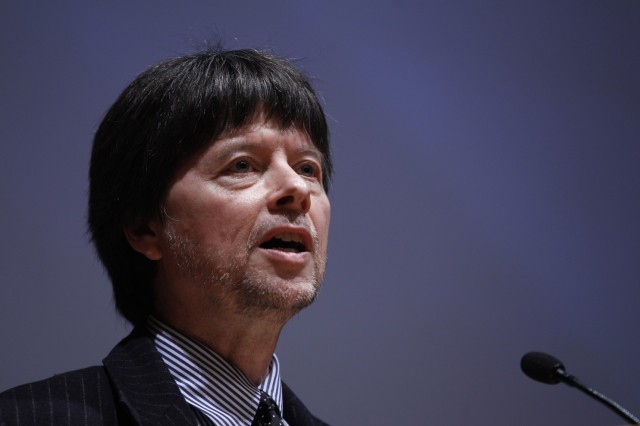 “Burns used the lecture to defend the humanities from its many attackers, to describe how those who work on issues of race (as he has done in many projects) face particular criticism and to champion the art of the narrative as a tool to advance history and promote a common understanding of society,” according to Inside Higher Ed.

Ken Burns is probably best known for his highly successful documentary film, The Civil War. Burns has gone on to make numerous documentaries on aspects of American history, music, sports, and culture.

In his lecture, Burns stresses that “in a larger sense, the humanities help us all understand almost everything better — and they liberate us from the myopia our media culture and politics impose upon us. Unlike our current culture wars, which have manufactured a false dialectic just to accentuate otherness, the humanities stand in complicated contrast, permitting a nuanced and sophisticated view of our history, as well as our present moment, replacing misplaced fear with admirable tolerance, providing important perspective and exalting in our often contradictory and confounding manifestations.”

“The humanities help make us smarter,” Burns argues. “From them, we can appreciate the complexities and undertow of our history, politics and culture. They suggest that knowledge and experience matter, that there are no easy solutions, that nothing is just black and white”

Inside Higher Ed reports on Ken Burns’s lecture. The prepared text of Burns’s Jefferson Lecture is available at the NEH website.

This entry was posted in Cultural History, Digital Humanities, Historical Film, History in the Media, Humanities Education, Museums and Historical Memory, The Past Alive: Teaching History, War and Society, War in Film, War, Culture, and Society. Bookmark the permalink.