This week’s horrific Easter bombings in Sri Lanka remind us once again of the troubling presence of religious violence in today’s world. 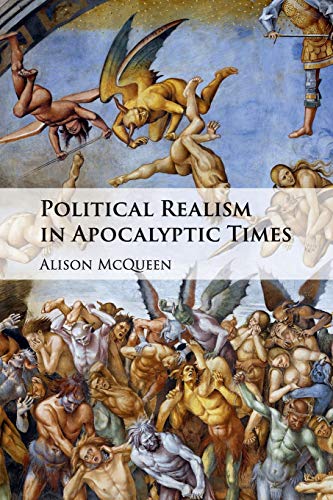 My review of Alison McQueen’s Political Realism in Apocalyptic Times has just been published by The Strategy Bridge.

I write: “We seem to be living in apocalyptic times. Since the September 11 attacks in 2001, apocalyptic language and visions of worldly destruction have proliferated in American political culture and news media and around the world. George W. Bush’s crusading Global War on Terror rhetoric employed frequent allusions to God’s will and the Last Judgment. The massive American bombardment and invasion of Iraq—accompanied by oil fires, looting, and destruction—produced a wealth of apocalyptic imagery. The ensuing sectarian conflict during the Iraq War fueled horrific killings, market bombings, and massacres. The brutality of the Syrian Civil War has prompted millions of Syrians to flee as refugees from a war-torn and devastated landscape. Militants have claimed to be acting to establish an Islamic State in Iraq and Syria in preparation for the end times. Civil warfare and religious violence in Nigeria, Congo, Libya, Sudan, Somalia, Pakistan, Myanmar, Indonesia, and other nations is often described in apocalyptic terms. Meanwhile, climate scientists warn of the potentially devastating effects of global warming, leading many journalists to offer apocalyptic predictions of global disaster.”

“Within this context, Alison McQueen’s Political Realism in Apocalyptic Times offers a refreshing approach to religion in political theory. …”

My review of Alison McQueen’s Political Realism in Apocalyptic Times is available online at The Strategy Bridge.