Women and War in Belgium

Gabrielle Petit stares defiantly into the distance, under gray skies in Brussels. Almost every morning, I walk beneath Petit’s stern gaze on my way to the archives, thinking about her last moments and about the long history of women and warfare.

Gabrielle Petit was a Belgian woman who became swept up in the chaos of the First World War (1914-1918), after Germans overran Belgium in August 1914 and occupied the country. Petit fled as a refugee but then returned to Belgium as a spy for the British Army, gathering information on German military dispositions across Belgium beginning in August 1915. German soldiers soon became suspicious of Petit’s movements in occupied Belgium and arrested her for spying in February 1916. A German military court tried her for military espionage and condemned her to death. Gabrielle Petit allegedly say: “I will show you how a Belgian woman dies,” before being executed by firing squad on 1 April 1916.

The bronze statue commemorating Gabrielle Petit’s patriotism stands in place Saint-Jean, near the center of Brussels. The sculptor, Égide Rombaux, attempts to capture Petit’s brave stance before the German firing squad, but figures Petit in a heroic pose that that evokes neoclassical works such as Eugène Delacroix’s Liberty Leading the People. Historian Sophie De Schaepdrijver recently wrote a book exploring the ways in which Belgians commemorated Gabrielle Petit’s sacrifice and constructed the historical memory of the First World War [1]. After the war, Petit was celebrated as a modern Joan of Arc, but the memories of her role in the occupation of Belgium gradually faded. The bronze statue of Gabrielle Petit nonetheless still offers a reminder that women have often played active roles in warfare.

When we think of women and war, then we conjure up images of mythical and historical warrior women, such as Wonder Woman, Amazon warriors, and Joan of Arc. Modern women increasingly serve in combat roles in the armed forces of the United States, Russia, Israel, and other nations. Nonetheless, gender issues surrounding the military service of women and persons with LGBTQ identities can still be controversial.

The issues of women, gender, and war thus flood my mind as walk through place Saint-Jean on my way to the Archives Générales du Royaume. Each day in the archives, I sift through manuscripts dealing with women and warfare from long ago. My current research focuses on gender and violence in the European Wars of Religion of the late sixteenth and early seventeenth centuries. I am searching for traces of gendered dynamics of the religious conflicts between Catholics and Protestants in the extensive records of the government of the Spanish Netherlands, which are held at the Archives Générales du Royaume.

The Low Countries (including today’s Belgium) was then embroiled in the Dutch Revolt, a bitter religious conflict between Protestants and Catholics in the Spanish Netherlands. The conflict began with protests over anti-heresy legislation and iconoclastic attacks on sacred images, and then expanding into a long civil war, known as the Eighty Years’ War (1566-1648). Flemish and French-speaking women were directly involved in these religious conflicts in many ways, but the sources dealing with women and gender issues are fragmentary. The heroic women who defended their communities at the sieges at Haarlem and Ostend were celebrated in the political culture of the Dutch Revolt, as historian Peter Arnade has demonstrated [2]. The women of the religious wars thus provided examples of courage to later Belgian women who have engaged in military service and participated in modern conflicts. 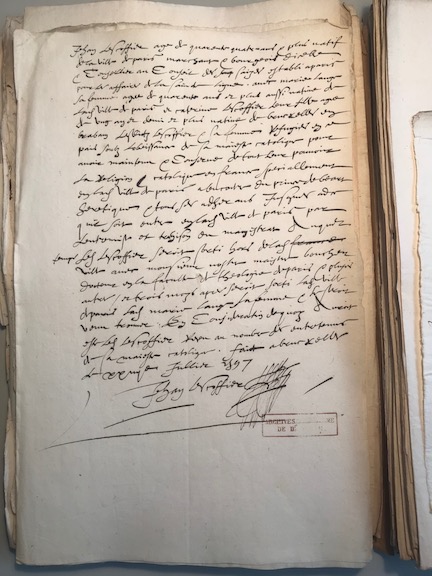 Although the statue of Gabrielle Petit stands alone in place Saint-Jean, she was actually part of a broad resistance movement in occupied Belgium during the First World War. Emmanuel Debruyne (Professor of History at the Université Catholique de Louvain) has examined the organization of the Belgian resistance movement, including its gendered dimensions [3]. I am fortunate to have the opportunity to exchange ideas on women and war with Emmanuel and his colleagues at the Université Catholique de Louvain during my Fulbright research stay in Belgium this spring.

[1] Sophie De Schaepdrijver, Gabrielle Petit: The Death and Life of a Female Spy in the First World War (Bloomsbury, 2015).

Note: A version of this essay will be posted on the website of the Fulbright in Belgium Program.